Why UsContact Us
Menu

Our experience includes designs for consumer markets as well as many industrial and government/military applications. In most cases we can quickly deliver assembled prototypes/small production builds in-house as well.

Besides doing our own fabrication and assembly, we also produce electronic work package for use with automated assembly and test processes need for full-scale mass production. We will work with any contract manufacturer the client selects or can offer suggestions based on the scope of the project.

We maintain a full CNC shop for rapid turnaround of the mechanical aspects of those projects. We can perform the electrical and mechanical design, write embedded system software, then actually deliver complete working proto/EAP products in the target form factor. We work with mold houses to generate molds quickly if needed.

We work well under pressure, have completed jobs over holidays just to get our customers' products out the door. For the last 9 years, we've completed an average of 8 complete product designs and 130 subsystem designs per year - all to the satisfaction of our customers.

One of the first designs our personnel did was for the original IBM XT, running DOS 1.1; it was for the video CGA adapter. At the time, there were no clones, no reference designs on developer.intel.com (the Internet wasn't really even accessible to common-folk), and the main method to layout multi-layer PC boards was to use Bishop Graphics 4:1 tape up (red and blue decals on velum). The video graphics device allowed the use of these early PC’s with the various projection and video production systems that were available in 1984.

Our personnel have pioneered development in many areas, including CMOS imagers and ISM-based RF devices. They hold patents (Inventor, USPAT 6,208,266) for remote data acquisition and processing system and for Wireless Intrusion Detection Devices.

We have since then designed, developed and manufactured digital, RF, analog and programmable logic based products. We have written custom embedded, networking, device driver and application software for these products.

Besides defense related products, we've also developed products for industrial automation, telecommunications, core network, and network-based security (IDS, firewall, crypto) appliance markets. Many of these products have been developed in a "concept to production" capacities.

Here are a few samples

This radio beats all currently deployed radios in the defense security market in terms of in built mesh networking protocol, data rates delivered and power consumption. It is dual band (138-174 MHz, 402-470 MHz), 12.5 and 6.25 KHz narrow band,with in built mesh networking protocol built in, and has a current draw of less than 50 mA at 3V. Its high sensitivity of upto -120 dbm sensitivity give it a large range. Its raw bandwidth is upto 9.6 kbps. We designed the RF and baseband hardware and wrote the embedded firmware. We manufactured, tested and delivered the initial production run.

Occasionally new clients approach us that are already well behind schedule and way over budget. Add to that the bureaucracy involved after being selected as a developer; getting the proper contract vehicles in place with primes, various departments, etc., and it can severely impact the time left to actually develop the product. This was the case with a recent project; it comprised a small multichannel wireless ADC device and wireless handheld device in a submersible container - you may have seen similar enclosures on web sites for "Area 51 sensors" recently (you can google that exact phrase - a picture is usually in the first link that comes up ).

Even with time and resource constraints, Sanjay and Wayne were able to specify, model, and create initial prototypes in less than three weeks. As we got further into it, we along with the team from the military and the contractor, learned that the spec which was originally written in 1988 was not clear on a lot of the technical aspects of the target systems. This led to further refinements, and in the case of the wireless ADC device, a significant change to the circuit topology.

Despite difficulties, we were able to get 10 new sets of the modified design completed and ready for FAT (First Article Testing) as per the military requirements in less than a month. Th problems included a customer mandated change to the mechanical system for the handheld, as well as a vendor suddenly EOL'ing (end-of-life'ing) a "new" OLED display without warning (Digikey still showed the product as "new" when the product manager at the vendor mentioned them killing the product line). This also required setting up and machining various mechanical aspects of including enclosure modifications, fixtures for assembly and actual part fabrication to satisfy the "adjusted" requirements. Not to mention having to hand place over 4,000 SMT parts (0603 passives), sometimes in less than three days.

The units passed FAT, withstanding MIL STD 883 tests that even the Government Furnished simulators used to test our devices would shutdown or reset during the tests. For example, when testing our DCA device, we injected ~8KV to our PCB ground; our device didn't even hiccup but the simulator crashed with the attached Windows application laptop rebooting back to a BIOS screen as well.

After a few more tests, we assembled another set of fifteen units that eventually passed the second tests known as FQT.

Solid Models of both the DCA and Handheld unit 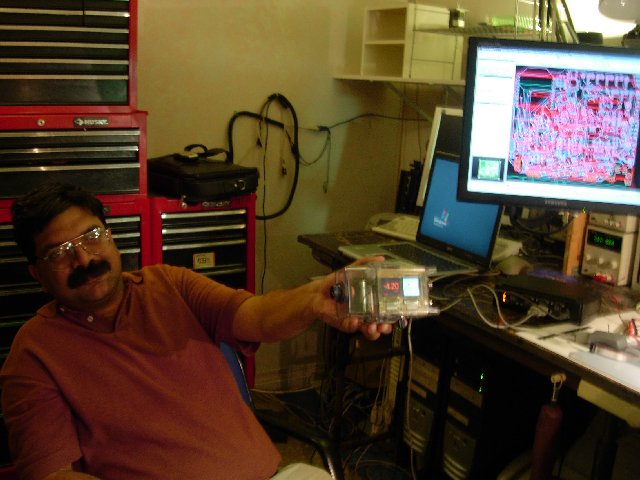 Pictures of Sanjay with the initial prototype 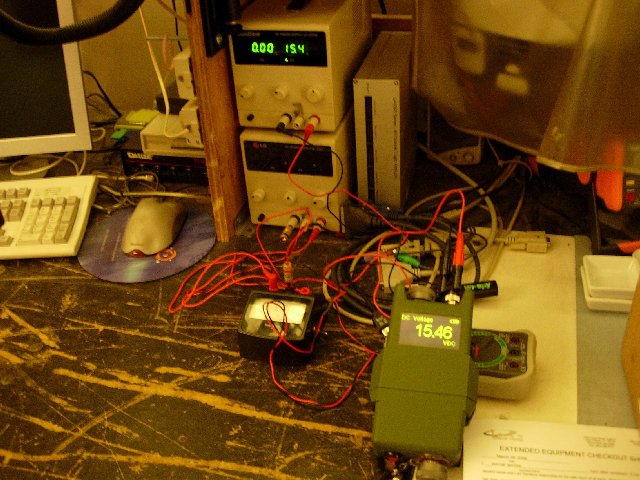 A picture of the completed FQT unit 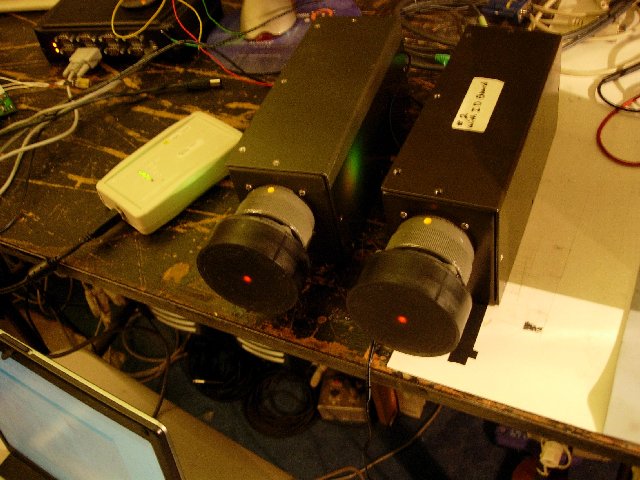 Our personnel designed, developed, oversaw the fabrication, tested and delivered the control and communication system for one of the first prototypes of a wide area remotely operated weapon system. Complete details of the currently fielded units are available on Wikipedia.

In order to test flight software for the GGS series of satellites, our personnel designed a closed loop simulator that simulated the complete dynamics of the satellite from separation, to rocket engine firing to acquisition of attitude data from sensors Our personnel developed sensor and actuator models, the simulation software and interface hardware. The simulation ran in real time and interfaced to a engineering version of the controller board running flight software through custom boards. The use of simulator led to the identification of several subtle and critical errors in the flight software. The satellites were successfully launched and operated and their data made significant scientifc discoveries possible

We have written the embedded and system software for more than 60 products. These have ranged from software radios, handheld units, data acquisition system, telemetry cards to complete integrated systems with multiple servers collecting data from hundreds of remote telemetry units. Here are a few samples

Hardware and PCB design and layout

Above is a 40 slot PCI 64/66 backplane. We designed this for a company that was using various I/O cards for multimedia applications.

Here's PDF of the board layout where you can zoom in and out, it's about 15Mbytes: 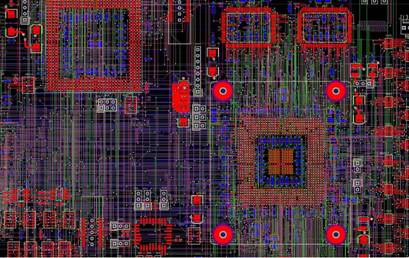 Above is a partial view of an OC48 packet processing PCB. This design was completed in less than 3 weeks.

It contained a 901 pin socketed BGA (custom development socket) 18 split planes for various power rails, 5 data busses running at 200 Mhz clock speeds (one was 128 bit wide) and various other I/O used for development of firmware /software. It fed a LVPECL transponder via an Intel 6048 framer.

This was a 19 page schematic and as mentioned, 10 layers with significant LVPECL nets with numerous layout constraints for impedance of dozens of differential pairs, 5 clock domains all running at 150MHz or more, and 18 split planes, each filtered and regulated. We turned that job in less than 10 days. We have lots of these samples, if you’d like more.

One of the techniques we use that made it possible to deliver in such as short period of time is the method of using staging tables to generate schematic symbols DIRECTLY from the manufacturers PDF datasheets. No chance of mis-keying pin names and numbers. If the datasheet is right, so is the schematic.

This is especially handy when doing parts like the 600 pin Intel IXF6048 framer, shown on the PDF example.

We have over 20 years of experience in 3D modeling and all forms of CAD design. We have and own over 20 licensed programs such as Solidworks, AutoCAD Mechanical, and various software tools used with our mid-sized 4-axis CNC machine.

Our acumen with both the practical considerations of the product as a whole leads to the success of our projects. A comment we always get (and can provide reference for) is:

A lot of the mechanical vendors we've used in the past, comment on how error-free the entire packaging is..We typically deliver EDWG’s to clients for verification of design intent and to insure that the overall product meets their criteria. An EDWG is a zip file that contains an executable viewer with the 3D model data that does NOT require any installation or other software to be present on the clients machine. You simple extract the EDWG file, execute the extracted file and enjoy. You can then rotate the model, zoom in/out, or hide/make transparent any part of the model. 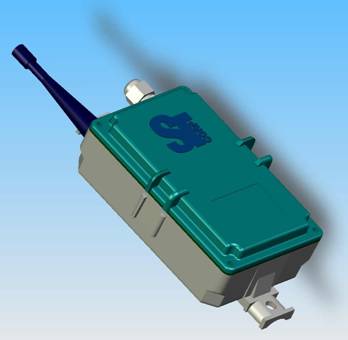 A prime example of an innovative injection mold design; where again, everything fit on the first run is located at: Link for ev0034.zip

This device was made to enclose a wireless device. It had to withstand full submersion, and maintain operation for over 10 years. It also had to cost less than $30.00 USD so as to provide a positive ROI to the utility over 5 years.

Having it all fit and work the first time as well as meet all the design requirements was critical to the accelerated delivery schedule proposed by the customers. I was able to accomplish this with time to spare.

A photo of the completed design is shown here 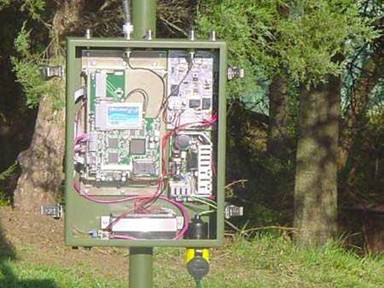 Another EDWG sample can be found at:

Here's another example of a rush job. A single rack unit chassis for use in network management. We designed the hardware as well as all mechanical parts in less that 3 weeks. We designed 4 custom PCB assemblies that allowed the device to failover to a pass-thru state if the custom supervisory processor detected any failure within the main subsystem.

An EDWG sample of the chassis design below can be found at: Link for owt0320-dual.zip

We built our own labs, soup to nuts, everything we would need to deliver working prototypes and limited run units from concepts . Not only can we do the package (or a lot of times use modified COTS enclosures) and electronic design, but we can get the PCB fabbed inexpensively, hand build the first few (even 700 SMT parts is no problem), write and load the embedded software, test it and deliver an actual working product. Our hands-on approach leads to prototypes and limited run units that can actually be mass produced and marketed 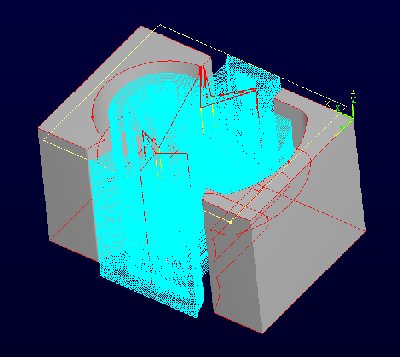 As to our  CNC shop, the following are some links to video samples of my machine:

Milling a front panel faceplate for a communication device:

Milling a COT enclosure for use in an avionics prototype (electronics designed in-house):

Cutting a pocket for usein a thermal solution for Hi Powered RF design (electronics designed in-house and by others):

Milling a 2" block for use in a mechanical subsystem:

Call 1-888-215-8557 or fill out the contact form for immediate help!
We use security software from Security and Privacy Software